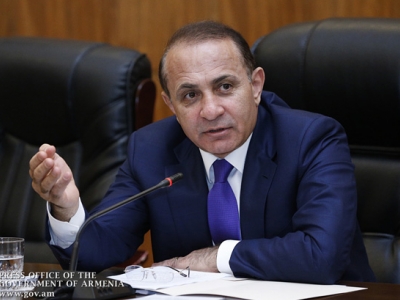 Prime Minister Hovik Abrahamyan assured that, despite the negative forecasts by international rating agencies, the Government of Armenia will ensure the 4.1-percent economic growth envisioned by the 2015 State Budget.

“In the months of January-June, our economic growth made up 4.5 percent,” Abrahamyan on Saturday told reporters in Gyumri city. “All international organizations were giving a negative assessment, and we urged them not to rush.

“A 4.1-percent economic growth is put on the basis of the 2015 budget. I’ve said several times that our economy is going to be more active in the second half of the year. Our team, led by the President, will do everything that we ensure that economic growth by the year’s end.”

And to a journalist’s remark that tax collection has dropped in Armenia by close to 15 percent in the first half of the year, the PM responded: “Our ultimate goal is not collecting taxes. If there are none, our goal is to reveal the shadow [economy] and obligate everyone to pay